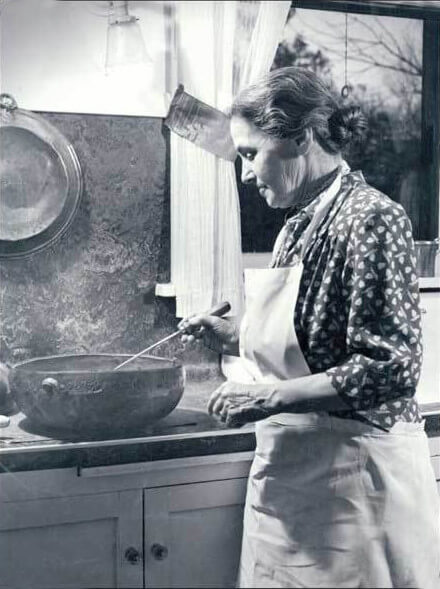 Sallie Lindsay White in her kitchen

William Allen White‘s wife, Sallie, was a noted hostess and an excellent cook. The recipe below was one of her favorites she cooked for her husband and his guests including President Franklin D. Roosevelt at their home, Red Rocks. Eighteen years after Sallie had passed away, her Jam Cake was featured during the banquet of the National Federation of Press Women’s Convention held June 15, 1968. This banquet coincided with the centennial of the birth of the late William Allen White, famed editor of The Emporia Gazette. It was said that nothing would have pleased him more than to have the National Federation of Press Women turn the spotlight upon his beloved wife. The recipe below was provided by the Kansas State Historical Society.

Bake in two layers (Sallie’s original recipe does not specify an oven temperature or cook time, but we suggest baking in two 8.5-inch round pans at 350 degrees for 35-40 minutes or until a toothpick inserted into the center comes out clean).