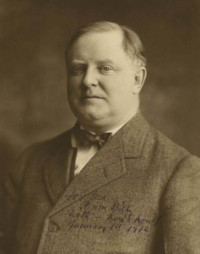 William Allen White was born in Emporia on February 10, 1868, the son of Dr. Allen White and Mary Ann Hatten White. He grew up in El Dorado, Kansas, and later attended the College of Emporia and the University of Kansas. He began his career working on newspapers in El Dorado, Topeka, and Kansas City.

On June 1, 1895, at the age of 27, he borrowed $3,000 to purchase the Emporia Gazette, and returned to his home town. William Allen White had something to say on virtually every topic that had anything to do with Kansas or the nation. He wrote countless editorials as well as articles and books that earned him the title of the “Sage of Emporia.” His 1896 editorial, “What’s the Matter with Kansas” launched White onto the national stage.

White became well connected to the Republican Party and national leaders after writing “What’s the Matter with Kansas.” He was very active in politics and an advocate of social reform. He even ran for the office of Kansas Governor in 1924 in an effort to fight the Ku Klux Klan. Over the years, several US Presidents visited his home in Emporia, including Teddy Roosevelt and Herbert Hoover.

White also became a regular contributor to national publications such as McClure’s, Harper’s Weekly, and Saturday Evening Post. Newspapers from across the nation carried his editorials.

William Allen married Sallie Moss Lindsay in 1893, while working for the Kansas City Star. They had two children. Their son, William Lindsay White followed in his father’s journalistic footsteps. A famous WWII war correspondent and roving editor for The Reader’s Digest, WLW wrote many books, including the bestsellers A Journey for Margaret and They Were Expendable.

Their daughter Mary was a bright young mind, energetic and socially conscientious. However, tragedy struck in 1921 when she was killed in a horseback riding accident at the age of 16. The editorial White wrote eulogizing his child became a classic read worldwide.

White served as editor of the Gazette for 48 years, until the day of his death, January 29, 1944. Today, the Gazette continues to be owned and operated by the White Walker family.