Welcome to the Emporia Self-Guided Walking and Driving Mural Tour!

Our journey will start at the north end of Commercial Street. You’ll notice Emporia State University at 12th and Commercial where there are multiple museums, the Eppink & Gilson art galleries, and Peterson Planetarium that are well worth exploration. Stop in at Orange Leaf for a custom self-serve frozen yogurt creation to get your motor running! There are plenty of boutiques and specialty shops along the route to satisfy every visitor. 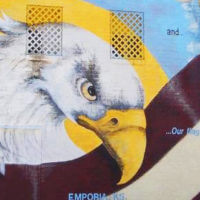 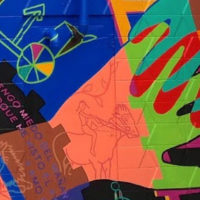 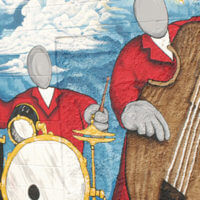 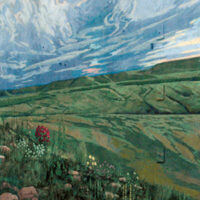 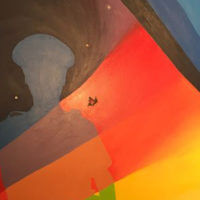 The first mural on the list, at 1025 Commercial Street, was named Our Flag Was Still There and painted by native Emporian, Marilyn Dailey. This work was commissioned in honor of all Veterans and the 50th Anniversary of founding Veterans Day in Emporia. The mural features an eagle overlooking the U.S. Flag with bombs bursting in air as a reminder of “All Gave Some and Some Gave All.”

Traveling on southward down Commercial Street, you’ll soon come to Dynamic Discs, another long standing tradition in Emporia. Stop in for all things disc golf. Never played? The staff would be more than happy to show you the ropes of this fast growing sport. Emporia hosts the largest disc golf tournament in the world, the Glass Blown Open, with over 1,500 participants! The guys at Dynamic Discs may not have created the sport but it’s been said that they’ve perfected it!

Your next mural stop will be a two for one deal as they are side by side! Mulready’s Pub at 717 Commercial is known for their ultimate scotch selection and craft beers on tap. To find this newest mural, you’ll have to head to the back patio of the bar.  Muralist Dave Loewenstein and filmmaker Nicholas Ward spearheaded the mural, which incorporates children’s artwork, progressive themes, and even a William Allen White quote into a vibrant collage of primary colors. Just a few feet away at Flint Hills Music you’ll see the beautiful Day and Night Jazz painted by Emporian Josh Finley on the back of their building. The scene of jazz musicians playing the piano, stand-base and brass instruments exudes what Flint Hills Music is all about! Flint Hills Music offers classes for various instruments as well as instrument repair and accessories.

While here, feel free to stop in at the Emporia Chamber of Commerce and Convention & Visitors Bureau at 719 Commercial for visitor information, city maps and attraction brochures or stop by the new Lyon County History Center at 711 Commercial. This newly renovated space has rotating exhibits, a permanent miniature train exhibit, a special kid’s corner, archives with access to ancestry.com and more! Explore stories from the past and discover things you never knew at the Lyon County History Center.

By this time you’re probably pretty hungry! Enjoy authentic, generous portioned Mexican dishes at Casa Ramos, daily homemade bread with sandwiches from Amanda’s Bakery or get over to Radius Brewery at 610 Merchant. This microbrewery serves beer brewed in the middle of the dining room as well as brick oven pizzas and creations from a Le Cordon Bleu trained chef! This is also the site of our next mural (south wall), Spring in the Flint Hills, painted by renowned artists Stan Herd and Louis Copt. The mural depicts a late spring landscape of the Flint Hills with exposed pieces of flint rock, for which the hills are named. The sky is full of a glorious Kansas sunrise and the prairie is covered with beautiful wildflowers in bloom.

The final destination on our mural tour is 518 Mechanic. You might notice as you pull up that you’re at the police station! No worries, you’re not in trouble. Head inside to see the community mural which was a collaboration by ESU students. This was commissioned by the police department and the city depicting equality and justice for all. One of the artists on the project explained it this way: “The eyes show that we need to see beyond color,” she said. “The rainbow also represents that. The officer in the mural is there to remind the officers in this building that they took an oath to protect and serve and they can’t overuse their powers because they will be held responsible. The statue of the blind justice represents an impartial judge. She has the scales on one side and the sword on the other, showing that you can’t judge someone based on skin color or ethnicity. The blue hand is the officer’s hand and the multi-colored hand is the community. This shows how they need to be in perfect unison. The sunflower represents the growth of the community.”

This concludes the mural tour, thanks for joining us! We’d be happy to have you stay in town a while longer so head down to the free David Traylor Zoo or the All Veterans Memorial in Soden’s Grove Park. Need to relax after all this walking? Head out to the Flinthills Mall to enjoy the newly renovated B&B movie theatre with large reclining chairs and in-theatre snack bars! Enjoy Emporia!