New plans are being made.

(Internal monologue about to happen)

…Hmmm.  1 disc costs $15 at the local store.  If I buy 10 discs straight from the manufacturer it will knock the cost down to $10 for each.  I can then sell them for $12.50 locally.  That will make me a couple of dollars as well as make the customer happy with a better price. …

This is, essentially, the beginning of Dynamic Discs in the brain of Jeremy Rusco.  A company that has sold, literally, hundreds of thousands of discs for millions of dollars began with this kernel of an idea and the grand scheme to move 10 discs.

After modest success locally, an Ebay store was created.  Business was booming.  Dynamic Discs was selling 10s of discs per month.  The workload was crushing and exciting.  If this kept up Rusco was going to have to quit his part-time substitute teaching job. New plans were being made.

It was a banner day when the first full box of discs (50 in total) was ordered.  Apparel was now being branded with the new DD logo.  Customers were reaching out from all the state for these cool designs, competitive prices and polite professionalism.  The workload was crushing and exciting.  If this kept up Rusco was going to have to hire a friend for a case of beer to help out.  New plans were being made.

Spreading the DD love by running tournaments all over Kansas and reaching down into North Texas was the next bright idea.  This hard working, always smiling boy from Kansas was now making fans in other states.  Discs were now being ordered multiple boxes at a time from multiple manufacturers and the basement was starting to overflow with plastic.  The workload was crushing and exciting.  If this kept up Rusco was going to have to actually hire an employee.  New plans were being made. 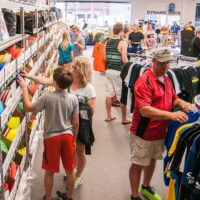 Pallets of discs were now showing up to the second retail location as the first had gotten too small too fast. Some of the biggest names in the sport were representing DD all over the United States.  Other tournament directors were wanting to pay DD to come and run their event for them because of the great reputation.  Manufacturers were approaching DD for stronger partnerships. The workload was crushing and exciting.  If this kept up Rusco was going to have to change the main focus of DD.  New plans were being made.

DD began a partnership to manufacturer its own brand of discs and became the exclusive American distributor of two of the biggest European brands of disc golf.  Shipping containers full of 50,000 discs were showing up. One of DD’s original discs won Disc of the Year in 2013.  Orders were coming out of our ears. The workload was crushing and exciting.  If this kept up Rusco was going to have to greatly expand in building space as well as personnel.  New plans were being made.

DD, and its sister companies, now comprise over a third of the total market.  Big box stores are ordering 1000s of discs at a time.  The three store locations are growing rapidly.  The massive warehouse is completely stocked to the roof.  We can’t wait for discs to come from Europe any longer.  We will have to start manufacturing right here in Kansas. The workload is crushing and exciting.  If this keeps up Rusco will have to set his sights on being the biggest and best company in the game.  New plans are being made.