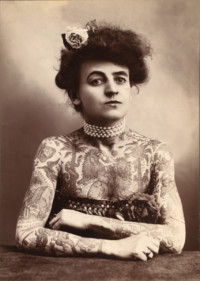 As a young adult, Maud was a performer in various traveling circuses as a contortionist and trapeze artist. Her travels with the circus took her to the 1904 World’s Fair, where she met Gus Wagner—a tattoo artist who described himself as “the most artistically marked up man in America”. She agreed to go on a date with him in exchange for a lesson in tattooing. They were married several years later.

Maud apprenticed with her new husband, practicing tattooing. She learned how to give traditional “hand-poked” tattoos, becoming a talented artist and the first known female tattooist in the United States. Although the tattoo machine had recently been invented, the Maud and her husband were two of the last tattoo artists to work by hand.

Maud and Gus traveled around the United States, working both as tattoo artists and “tattooed attractions” in vaudeville houses, county fairs and amusement arcades. They are credited with bringing tattoo artistry inland, away from the coastal cities and towns where the practice had started.

Their daughter, Lotteva, started tattooing at the age of nine and went on to become a skilled tattoo artist herself.