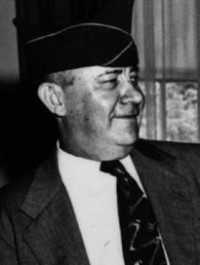 The reason Americans set aside November 11th to remember those who have served in all wars and conflicts is due to the efforts of an Emporian whose beloved nephew was killed in the World War II.

In 1953, shoe salesman Alvin J. King proposed either creating a special day to honor all veterans or adapting Armistice Day so that it was dedicated to all veterans since, at that time, Armistice Day honored only the veterans of World War I. King had been grieving the loss of his nephew, John Cooper, whom he had raised. Cooper had been killed in action in 1944 during World War II while serving with Rifle Company B of the 137th Infantry Regiment.

The Emporia community rallied around King, and held the very first Veterans Day celebration right here in Emporia in 1953. That same year, the Emporia community raised enough money to send King and his wife, Gertrude, to Washington, D.C. to garner support for an official nationwide veterans day. King had a friend and supporter in Representative Ed Rees of Emporia, Kansas, who was strongly in favor of King’s idea and said ‘‘it would give the holiday a new meaning and more widespread patriotic observance.’’ 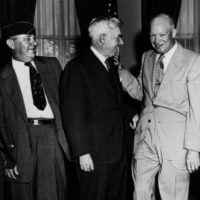 On June 1, 1954, President Dwight D. Eisenhower, who was also raised in Kansas, signed into law the Act proclaiming November 11 as Veterans Day (Public Law 380 of the 83rd Congress). On October 8, 1954, President Eisenhower issued a presidential proclamation concerning Veterans Day in 1954 in which he stated, ‘‘On that day let us solemnly remember the sacrifices of all those who fought so valiantly, on the seas, in the air, and on foreign shores, to preserve our heritage of freedom, and let us reconsecrate ourselves to the task of promoting an enduring peace so that their efforts shall not have been in vain.’’

The first nationwide observance of Veterans Day was on November 11, 1954.