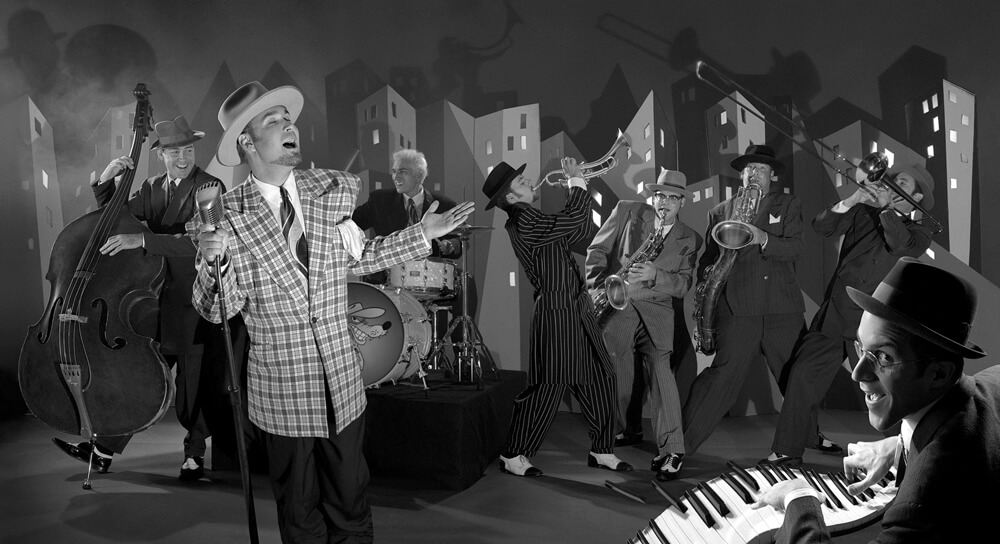 Who doesn’t love to swing dance to some Big Bad Voodoo Daddy? The well-known jazz band, along with a powerhouse country group, a classical pianist, and two visually stunning dance acts will all be performing in Emporia in the coming months.

The shows are all part of Emporia Arts Center’s annual Performing Arts Series.  The series kicks off tomorrow night and runs through late spring. With this year’s diverse line up, there’s a little something for everyone, so plan a night out in Downtown Emporia! Tickets for all shows are on sale now at emporiaksarts.org.

Tomorrow, September 26, at 7:00 pm, Albert Taylor Hall at Emporia State University
MOMIX is a company of dancer-illusionists combining acrobatics, dance, gymnastics, mime, props, and theatrical effects. Each production focuses not only on the beauty of the human form, but also the beauty of nature, music, scenography, and life itself.   Tickets

Friday, October 26, at 7:00 pm, Emporia Granada Theater
Farewell Angelina is an all-female country group featuring four powerhouse vocalists, blazing violins, and unique harmonies that have taken Nashville by storm. Rolling Stone recently named them as one of “10 New Country Artists You Need To Know.” Onstage, they’ve opened for Blake Shelton, Rascal Flatts, Dierks Bentley and a host of others.  Tickets

Monday, February 18, 2019 at 7:00 pm, Albert Taylor Hall at Emporia State University
You may have seen this unique dance troupe on America’s Got Talent. Kids and adults alike will love this exhilarating show – the audience will see dancers in electrified glow-in-the-dark suits performing dynamic routines and illusions on a darkened stage.  Tickets

March 10, 2019 at 2:00 pm, Beach Music Hall at Emporia State University
Andreas Klein is widely admired as a pianist of rare sensitivity and musicality. He has performed in many of the leading houses of Europe, from Wigmore Hall in London to the Berlin Philharmonie, as well as Carnegie Hall in New York and the Kennedy Center in Washington DC. The Washington Post has praised his “articulate and flowing pianism” while the New York Times called him “a pianist who makes silences sound like music.”  Tickets

April 30, 2019 at 7:00 pm, Emporia Granada Theater
2018 marks the 25th anniversary of Big Bad Voodoo Daddy’s arrival onto the music scene, reminding the world that it’s still cool to swing. Since their formation in the early nineties in Ventura, California, the band has toured virtually nonstop, blending a vibrant fusion of the classic American sounds of jazz, swing, and dixieland, with the energy and spirit of contemporary culture. The band’s original horn-infused music and legendary high energy show introduces the genre to a new and younger generation while remaining cognizant and respectful of the music’s rich legacy.  Tickets