A History of Bicycles: From Penny Farthing to Ebike

As home to a large cycling community and the world’s most epic gravel cycling race, Emporia loves bicycles! Bicycles have had a colorful past since their ancient beginnings in the 15th century up to today. Take a ride with us and learn all about cycles, including the current trends here in Emporia.

If a bicycle can be defined as a human-powered vehicle, it all began in 1418 with Giovanni Fontana’s four-wheeled contraption. Necessity, the mother of invention, did not push the idea further in fifteenth century Italy, so it lay dormant until 1817 when German aristocrat Baron von Drais invented the Draisienne, or “running machine”. Most histories, begin with the Draisienne because Fontana’s machine is cut off from more recent developments and bore little resemblance to modern day bicycles. The Draisienne, which had two wheels, was propelled by walking and constructed entirely of wood, making it extremely heavy. It was invented as an alternative to a horse because the bad harvests of the 1810s meant that many horses that could not be fed had to be slaughtered. The necessity of the industrial age and a booming population now continued to stoke the fire of invention.

The Boneshaker and the Penny Farthing 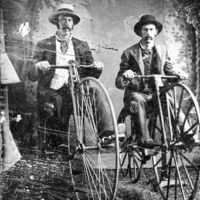 In the early 1860’s a bicycle with two steel wheels, a wooden frame and pedals was invented. It was called the Velocipede but more often known as the Boneshaker because of the painful effect of wood against steel across cobbled streets. Some manufacturers also experimented with steam-powered bicycles and solid rubber tires were first used in this decade. In 1869 the first road race, from Paris to Rouen, took place and was won by James Moore. The iconic Penny Farthing debuted in 1872 and was invented by James Stanley. It was one of the first models to be known as “bicycle” and was more comfortable to ride because it had a metal frame as well as metal wheels. The characteristically large front wheel meant that the rider could travel further in a single revolution, but also that it was very difficult to mount and start off because of its height.

In the 1870’s the unicycle was invented, the first chain-powered bicycle hit the markets and William Grout tinkered together a portable bicycle. During this decade, John Kemp Starley also began working on what would eventually be called “the safety bicycle” or “Rover” in 1884. It was the most practical model of bicycle to that date. The wheels were almost exactly the same size and the tangent spoke wheel was the next big step in cycling comfort, as well as meaning that the bike was lighter than previous models. It also had strong enough metal for the chain, and the frame was roughly similar to modern bicycles.

In 1887, Thomas Stevens became to first person to cycle around the world, then in 1888, a Scottish-born Irish veterinary surgeon – John Boyd Dunlop – invented inflatable tubes and pneumatic tires. These developments and particularly mass production meant that cycling could become more than just a fancy and expensive hobby as middle class people began to see them as a useful transport.

The 1890’s saw the patent of the tandem velocipede by Henry Barr and Franck Peck, as well as the development of the first motorcycles and production of aluminum bicycles by Cycles Aluminium. In 1895, Ogden Bolton Jr. patented the first battery-powered bicycle, the forerunner of modern day ebikes. All bicycles up to 1898 had fixed pedals, but in that year freewheeling was invented, meaning that the wheels would still turn even if the cyclist was not pedaling.

At the turn of the century, the early recumbent bicycles were patented and Paul de Vivie invented the derailleur gear so that cyclists would not have to remove wheels to change gears. This innovation only made it to the Tour de France in 1937, though the first Tour de France took place in 1903, won by Maurice Garin. It had only six stages with an average of 400km each, whereas the 2017 race will have 21 stages, the longest of which is 220km.

A Dip in the Road

The 1920’s saw a decline in the bicycle market, so companies like Raleigh Bicycles, which was started in 1887 by Sir Frank Bowden, and the Wright Cycle Company, which began in 1893 in Dayton, Ohio, began to produce bicycles for children in an attempt to revitalize the industry.

And Up the Other Side

In the 1930’s, the Cruiser bicycle was being developed and sold by Schwinn and by the 1950’s Huffy Radio Bikes were on the market, with built in radio. Race bicycles or road bicycles were invented in the 1960’s and Raleigh began selling their Chopper bicycle in 1968. The mountain bicycle soon joined the scene in 1970.

Teledyne began mass-producing titanium bikes in 1974, and in 1975 Veronica and Colin Scargill from the UK became the first people to ride a tandem bicycle around the world.

In 2011, Salsa Cycles produced the first bike specifically for new sport of endurance gravel cycling, which has become increasingly popular. Bikes such as these are frequently seen around Emporia and the Flint Hills.

As humans become more conscious of the need to look after the world, new bicycle technologies have come to the fore. Bicycles are transport that is good exercise, faster than walking and does not release poisonous fumes into the atmosphere. Built with new, lighter materials, these remarkable machines have the ability to take people to scenic places and let people experience the outdoors without harming it.

The invention of e-bikes, made possible by the improvement of battery technology, have pushed bicycles once again to front and center. The developments of these machines is an exciting and growing market where systems are constantly being tested, produced, released and improved. For example, pedal assist e-bikes have moved from having a throttle, like a motorbike, to a torque sensor, which means that the harder you push the pedals, the more power you get from the motor. If you’re looking for a fun way to explore downtown Emporia, stop into Eclectic Bikes and rent one of their pedal assist e-bikes by the hour!

See our guide about where to ride in Emporia and the Flint Hills.